Although HBO has strong brand equity, awareness of the breadth and depth of their On Demand offerings could be stronger. But how could they raise awareness in an engaging way that is appropriate to their target audience?

HBO hired Studio Lekker to create an online experience that would do just that.

For brands to remain relevant, they have to adapt to emerging technologies and evolving consumer behavior. For HBO ON DEMAND, that meant creating a useful, compelling, and playful application that is appropriate for the demographic, and allows users to discover and interact with HBO ON DEMAND content.

So many times, the question asked when deciding what to watch—be it a movie or program—is: “What do I feel like?”

Studio Lekker took this to the next level by creating an On Demand Mood Selector for HBO whereby viewers can preview and select content based on what they’re in the mood for. Now, finding something to watch is as easy as 1-2-3.

With the HBO ON DEMAND Mood Selector, simply choose three words that best describe what you’re in the mood for, and voila, you’re previewing and watching the best that HBO ON DEMAND has to offer.

Users can explore and engage with the HBO ON DEMAND Mood Selector right from their Facebook page. They can then take it viral by sharing it with friends.

Users can learn about the HBO ON DEMAND Mood Selector on Facebook’s HBO Fan Page and are encouraged to use the application.

A banner ad was developed to run on Pandora, Last FM, HBO and other HBO affiliates. The ad drove people to the HBO ON DEMAND Mood Selector microsite.

A playful, engaging microsite that gets across the depth of programming that HBO ON DEMAND has to offer, and that is distinctively HBO in its appearance and execution.

Affililiates, bloggers, and others can download and place this widget on their sites. The widget takes users to the HBO Mood Selector microsite.

Within two weeks of the HBO ON DEMAND Mood Selector’s debut, HBO’s fan base nearly doubled.

Within the first week of launch, the microsite saw 60,000 unique visitors, and the affiliate widget was downloaded 550 times. 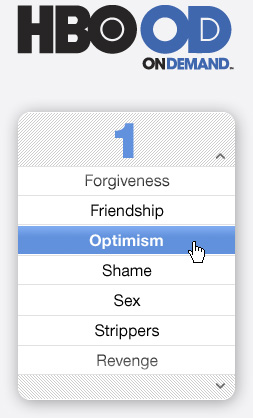