CoolCapitals is a specialized tourism service with the goal of persuading Americans to visit some of Europe’s less-traveled hotspots. They have a five-city focus centered on Amsterdam, Antwerp, Valencia, Vienna, and Zurich.

Autumn is a popular time to visit Europe, and CoolCapitals wanted to use this as an opportunity to attract new customers. They hired Studio Lekker to create a campaign that would run exclusively in New York where their target audience could be found in high concentration.

CoolCapitals isn’t looking for just any kind of clientele. Their sweet spot is 30-40 year-old urbanites. Successful, fun-loving professionals in fields like architecture, fashion, and advertising. Their interests include art, music, nightlife, fine dining, and of course, travel. They see themselves as trendsetters.

Countless people visit Europe’s cities to soak in their historical beauty. But in some cities there is also a contemporary renaissance going on just below the surface that is often overlooked. It is this marriage of old and new, elegant and hip, that would serve as the point of differentiation for our five cities.

“Mash It Up!” was a five-day brand event hosted at the trendy OpenHouse Gallery in SoHo. The idea was to reflect the spirit of the five cities in a fun and engaging way that would get potential travelers to consider visiting them. A key factor in determining the promotion’s success was its ability to grab attention and surprise pedestrians with a unique blend of media, technology, and design.

The venue window contained a projection that was affected by the movements of passersby. It caught people by surprise and made them curious. After engaging with the storefront many people decided to come in and see more.

Special maps were created for each of the five cities that highlighted main attractions and upcoming events in a playful and intuitive way.

Inside the gallery was a photo set where visitors could be shot against a personalized montage backdrop, including their favorite city. These photographs were later uploaded to an event sitelet where participants could retrieve them.

Event participants who retrieved their photos were also encouraged to share them with friends. As a result this sitelet turned into a viral engine for spreading the word about CoolCapitals. 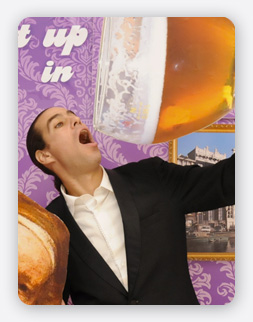